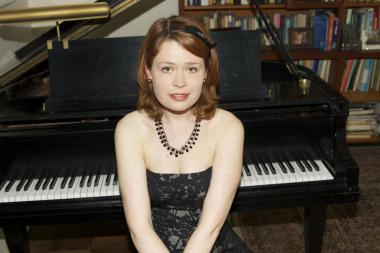 Raised in Oregon and now based in Brooklyn, NY, Libbie Schrader is a singer/songwriter with a passionate alt-pop/rock style. While Libbie delivers a complete repertoire of cover tunes while performing in piano bars, she also excels as a performer of her own material.

Libbie was the first winner of the Pantene Pro-Voice competition, beating out over 1,200 other female-fronted acts when she opened for Jewel at SummerStage in New York's Central Park. Prizes included a nationwide club tour at venues including the House of Blues in New Orleans and the Roxy in Los Angeles, as well as a demo deal with Atlantic Records. Schrader's band also took part in Jewel's "Soul City Cafe" program for independent artists, where she opened three shows on Jewel's "This Way" tour. Libbie appeared on the Gilmore Girls season finale performing her song "Sweet When You Wanna Be."

Libbie's songs are featured regularly in a wide variety of MTV shows, including "The Hills," "True Life," and "Parental Control," to name a few. Her song "Come When I Call" is featured in the July, 2011 season premiere of the Style network show "Giuliana and Bill." She also just raised over $26,000 through her fan base for her latest full-length record, entitled "Magdalene," and she will be doing a U.S. tour to promote the record in August 2011.