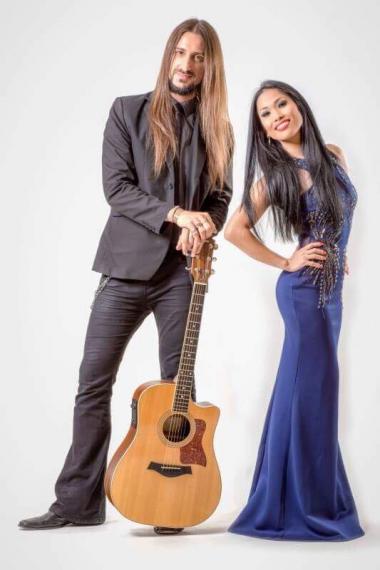 Kimberly Alexis and Santiago Periotti are based in Australia and have combined their talents to form the duo of Kimberly & Santiago.  Kimberly, who has performed in hotel lounge bars, casinos and cruise ships internationally, handles the lead vocals and Santiago is on guitars and vocals with more than 15 years of live performance experience.  They are able to tailor their performances to be as laid back or up-tempo as is required -- choosing songs from their expansive song list.

Kimberly is an international vocal sensation.  She is a versatile vocalist, entertaining audiences in Australia, Japan, Europe and the USA.  From humble beginnings in Tokyo, Japan Kimberly now calls Brisbane, Australia home.  This singing diva takes audiences on an amazing journey through music history, delivering the best-known hits of our time.  During 2015 and 2016, she was a popular headline performer on the P&O Cruise Line's Pacific Dawn.  Audience members come away feeling as though she has performed just for them.

Santiago Periotti is a singer, guitarist and songwriter from Santa Fe, Argentina. He has performed his music throughout the world for more than 15 years, touring Central and South America and Australia.  He is characterized as a blues/rock sound, but he ventures into other styles like Soul and pop music through a vast repertoire of cover songs.  He has entertained audiences on cruise ship and in hotels, casinos and bars, as well as at international festivals and large venues throughout Latin America.