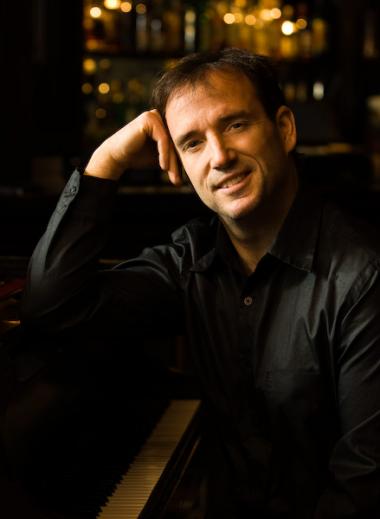 Steve Dooks is a musical director, composer, “pianoguy” who has been an East Coast musician for more than twenty years. As a pianist he has performed extensively in Europe and the United States. Steve’s music has taken him all over the world playing piano clubs in Norway, England, Scotland, Germany, Switzerland, and Halifax, where he enjoyed a full time piano gig for twelve years at the popular market, “Pete’s Frootique” based in Halifax, Canada.

He has performed at the Canadian Embassy in Brussels and has also shared the same stage with the likes of Tony Bennett, Tom Cochrane, the Canadian Tenors and the Dixie Chicks. His C.D. “Cocktails, Heartaches and Cigars” has charted nationally on public radio and Radio Netherlands in the smooth jazz genre.

Steve Dooks never took any formal piano lessons. He never practiced long hours as a child. His education came from listening to the “old songs” his father, a semi pro musician played and sang around the house. Later, while studying English at St. Francis Xavier U., Steve was introduced to jazz while hanging around with friends in the music dept.

Summer stock theatre gave Steve   a role as an actor who played the piano and that put him at the keyboard for six intense months on stage playing the keyboard. He never looked back, studying the stylings of Fats Waller, Floyd Cramer, Jerry Lee Lewis, Bill Evans, and Oscar Peterson.