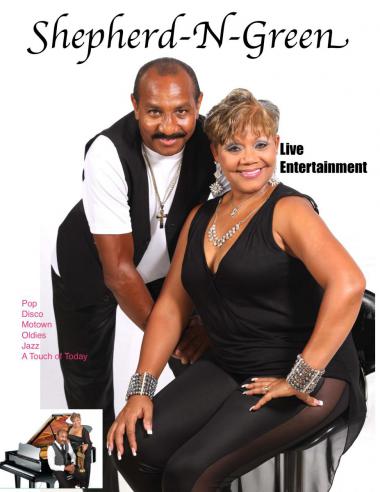 Jeffery Shepherd and Linda Green met while attending Indiana University.  Although Linda was studying opera, she made a smooth transition into jazz and pop music while utilizing her opera techniques.  Having studied classical and played jazz piano, Jeffery was able to create and communicate musical ideas in new and unique ways.

As an accomplished pianist and keyboardist, Jeffery has worked on shows with, Eric Kloss, Groover Washington Jr., Peaches and Herb, Melba Moore and others.  An accomplished performer in theater, pop and casino shows, Linda has also taught voice at various music schools.

The duo began working in the Philadelphia area and built a respected reputation there.  They later expanded to a larger group and began performing in show rooms.  The group worked throughout the east coast of the USA, including Atlantic City casinos and Florida/Caribbean cruises.

As Shepherd-N-Green, they now reside and work in the Florida area as a duo.