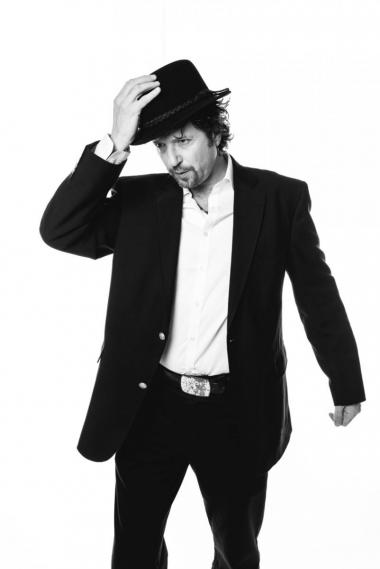 Piano player and singer, recording artist, nightclub owner, Gold Coast icon, island-hopping bar star, ninja warrior, and matador Steve Kouba (a.k.a. Savory La Fontaine, his 80s glam rock alter ego) is the type of wild-eyed creative archetype that this country used to breed in bunches. In today’s world of plastic heroes and paper tigers, Kouba looms large over a creative body of work that reaches around the globe, blending tight modern rock style and sensibility with the piano bar tradition. He owns the title ‘Jack Of All Trades (Master of None)’ and keeps it on full lockdown, using the power of The Song, in all of its forms, to propel him forward in life. He tours. He records. He lives. He loves. He is The Most Interesting Man at the Piano.

Kouba has logged more than 20 years as a piano man in Chicago’s Gold Coast. His first downtown gig was at the old Jay’s, on the corner of Walton and State, where he was set up on a piano "so dilapidated it barely passed for furniture,’ Steve recalls.   'You had to work the sustain pedal via its plywood lever in the guts of the piano with your entire leg, accessed through a hole kicked in the frame by some desperate player before I came along.”  He was an ongoing attraction at the original Underground Wonder Bar, where he held down the legendary Sunday and Monday graveyard shifts (1-4 AM) for years, performing radio rock on a grand piano for Gold Coast nocturnals. The Wonder Bar was where Kouba truly found his magic and mode as a player in the piano game. From there, he began playing all manner of clubs, piano bars, and high-end steakhouses. He can still be seen at the Zebra Lounge - The Zebra, an iconic club that holds the 3rd oldest liquor license in the city, has been voted Best Piano Bar in Chicago. Steve even represented The Zebra on reality television on the truTV series Barmageddon in 2015. In 2014, Kouba became part owner of the new Zebra Lounge in Memphis, TN, and the bar quickly became popular with lovers of brilliant live music and local service industry personnel. He’s performed dueling pianos regularly over the last decade at Sluggers World Class Sports Bar and Dueling Pianos, across from Wrigley Field.

Too big for the Lower 48 to contain, Kouba has taken his act to many piano bars in the Caribbean. He has played in St. Maarten, Barbados and is now playing return engagements on the island of Aruba. He also performs regular tours on Norwegian Cruise Lines as part of a franchised Dueling Pianos act (Howl At the Moon).  Kouba performed on the maiden, transatlantic voyages of three consecutive Norwegian cruise ship inaugurations: The Epic, 2010 (Miami, Barcelona), The Breakaway, 2013 (New York City), and The Getaway 2014 (Miami).  All three of these ships were ranked in the Top Ten of The 14 Most Popular Cruise Ships of ’14: by Cruise Critic.

Chicago music fans also have seen Kouba plying his trade in both the original music and theater scenes. He has appeared, written, and/or recorded with many important Chicago artists including Michael McDermott, Tony Rogers (The Good), and Mic One, as well as having performed with a diverse line-up of popular Chicago bands including The Convulsions, Quantum Leep, Tripping Billies, Duke Street Kings and many others. He also releases his own alternative rock singer/songwriter original material at incredibly irregular intervals. His first solo record was Consanguinuity, in 2000 and his most recent effort was the Prodigal Son EP, released in 2014.

Steve made his first appearance on the Chicago theater scene when he wrote the musical score to Steven Dietz’s “Trust,” which ran at Chicago’s Atheneum Theatre in 2000.  Then there’s Savory. For the uninitiated, Steve Kouba is the proud owner of an alter ego, one Savory La Fontaine, a pompous, androgynous, and certainly delusional 80’s glam rock star from the Chicago cover band Quantum Leep, perhaps the first and arguably the most loved 80’s cover band in Chicago.  Created as an 80’s-era response to the famous Afrodisiacs (70’s disco), the band took on a life of it’s own, as did Steve’s character within it, becoming true performance art and a permanent part of his swaggering oeuvre. Quantum Leep played clubs, private events and summer festivals, and headlined Chicago's House of Blues five times, which may be a record for an all-cover band.

With a 20 year history performing behind a piano and keyboard, Steve Kouba has become one of Chicago’s most recognizable entertainers. From piano bars and intimate venues to rock stages, festival crowds, cruise ships and Caribbean piano bars, he navigates an ever-changing world of creative entertainment on a journey that is taking him around the planet and back again. He is a solid performer with the ability to make a crowd listen and laugh in any venue, public or private. He’s a self-described ‘piano-man-bar-star-vagabond-fuck-up-with-a -recording-habit' who is continuing to speed up and spread his word with each unforgettable show.