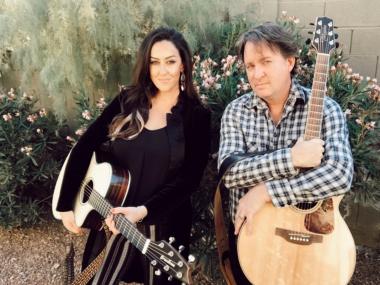 Both Canadian natives, Jim and Jill have performance in their blood!

Jim's passion for guitar had him performing publicly by the age of 13. He entered Brandon University with scholarships and earned his bachelor degree, with a major in classical guitar. He then went on to tour extensively across North America as a sideman, show director and band leader. Jim was drawn to the excitement of the Las Vegas strip and earned over 20 years of experience playing lounges and showrooms in Las Vegas's most beautiful mega resorts, where he has built a loyal following of fans. When Jim isn't dazzling the Las Vegas party crowd he is probably directing shows and teaching guitar to Vegas's future stars at the School of Rock!

Singing is Jill's first language and she grew up in a musical family. Before graduating high school, she had already performed in 4 main stage musicals. At 17 she was accepted into the Randolph Academy of Performance Art in Toronto, where she eared a diploma in singing, acting and dancing. As soon as she was old enough to step into a lounge she was performing in jazz clubs all over downtown Toronto. Tired of winter, Jill went on to work on cruise ships for more than five years as lead singer in main stage shows. Jill then headed to Las Vegas and performed as lead vocalist in cover bands at various hotels and casinos, where she met Jim.

The two worked together for the first time 10 years ago and have now created the duo act of their dreams! Jim and Jill have a wide range of expertise including country, classic rock, jazz, pop, classical and even poolside vibes! They can perform entirely acoustically or with backing tracks and they have an ever growing repertoire of songs that are sure to deliver on any occasion and to every crowd!