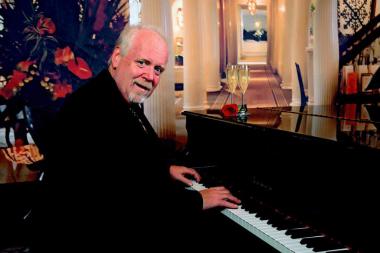 Crag Jensen hails from Buffalo, New York, where he began piano lessons at the age of eight.  By the time he was eleven, he was playing Beethoven and other assorted classical composers.  He also took a keen interest in popular music at an early age.  This interest, combined with my more formal training, had him playing both the Beatles and Mozart with equal ease by the sixth grade.

In high school Crag had lead roles in plays and musicals, and began his studies of music theory and composition.  In college he majored in music theory and composition and paid for a-good-deal of his tuition by obtaining a scholarship (for jazz piano).  He also was appointed the “student fellow” of the head of the music department.  After he graduated he became keyboardist, vocalist and composer/lyricist in the band Rhema that landed a recording contract with Curb-MCA in 1983.  Upon the break up of Rhema, he moonlighted in several different top forty bands during the mid- to late-eighties.

In 1990, Crag was hired by Lil Dittys, a dueling-piano bar in Phoenix, Arizona. He performed at this bar and one of their sister locations in Gulfport, Mississippi.  Since 2000, he’s performed in twenty-states and in the Caribbean as a dueling pianist and solo pianist/vocalist/guitarist/drummer.  He’s also completed several contracts as a solo pianist/vocalist for Royal Caribbean and Carnival Cruise Lines.