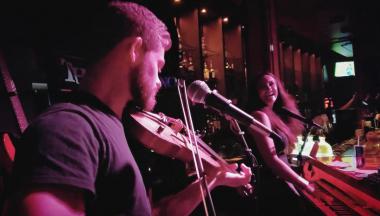 Susan Erwin Prowse and Cliff Prowse are a husband and wife international touring duo armed with a piano, fiddle and guitars based in Little Rock, Arkansas. Their high energy, all request show keeps crowds entertained for 4-5 hours each evening.

Susan has been performing in piano bars for over 15 years. Cliff joined her 2 years ago and their show skyrocketed! With over 1,000 songs in their arsenal, they bring a great mix of country, blues, rock, pop and oldies to crowds of all ages.

Singer, songwriter, multi-instrumentalist, and producer Cliff Prowse performed for a couple of years in Nashville and has been producing his own music and other artists for years. Singer, songwriter, pianist, and Nashville recording artist Susan Erwin Prowse has launched a successful music career now for almost two decades with 2 albums released out of Nashville.

The two have joined forces performing over 200 dates a year in venues worldwide and will be releasing their own original music as a duo this year!

When not touring, they are owners and founders of Big Red Dog Productions, a Music Production and Artist Development company located in Little Rock, Arkansas. Susan has also launched an online boutique and brand - Rainy Ray.